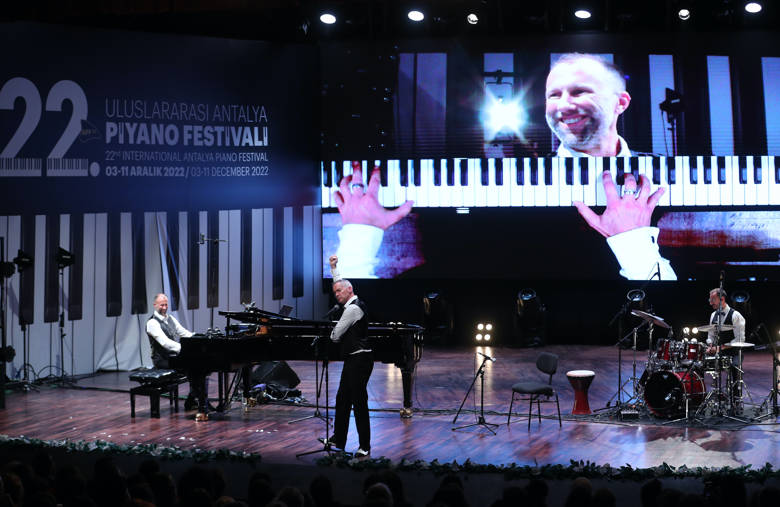 The 22nd International Antalya Piano Festival, hosted by the Antalya Metropolitan Municipality, started with a magnificent four-handed piano show by Pianotainment, consisting of Germany's best performance artists, Stephan Weh and Marcel Dorn, where entertainment and virtuosity met. The duo, who came to Turkey for the first time, gave an unforgettable night to music lovers at their concert, whose tickets were sold out days ago.

Unforgettable Show from Pianotainment, Coming to Turkey for the First Time!

One of the most important art events of Antalya Metropolitan Municipality, the 22nd International Piano Festival opened with an unforgettable concert full of music and fun.

The magnificent night started with the speech of Cansel Tuncer, Secretary General of Antalya Metropolitan Municipality and Administrative Director of the Festival. Stating that the festival is the pride of Turkey and Antalya, Tuncer said, "Our 22nd International Antalya Piano Festival, which we held this year, has once again brought us together under the roof of music, which is the common ground for us and universal language of humanity."

The performances of Pianotainment, which consists of the best performance artists of Germany, Stephan Weh and Marcel Dorn, which is defined as the perfect combination of piano comedy and virtuosity, attracted great attention from art lovers.

The Pianotainment group, which came to Turkey for the first time, gave the audience an unforgettable night with their colorful stage performances and surprises.

Combining music with humor, the fun duo created a storm of laughter in the hall with their jokes throughout the night and in the section where they played the birthday song according to different countries.

The Pianotainment group, which was in contact with the audience throughout the concert, got full marks from the audience with their colorful and unique stage shows where they danced and played different instruments. The solo performance of the band's drummer Magnus Dauner and the virtual drum show that the duo made with their phone app were applauded for minutes. The group ended their concert with a selfie they took with the audience.

At the end of the night, the Pianotainment group was given a plaque of appreciation and flowers by the Deputy Mayor of Antalya Metropolitan Municipality, Oktay Başaran. The festival, whose tickets were sold out days ago and where music lovers showed great interest, will be the scene of a star parade until 11 December.