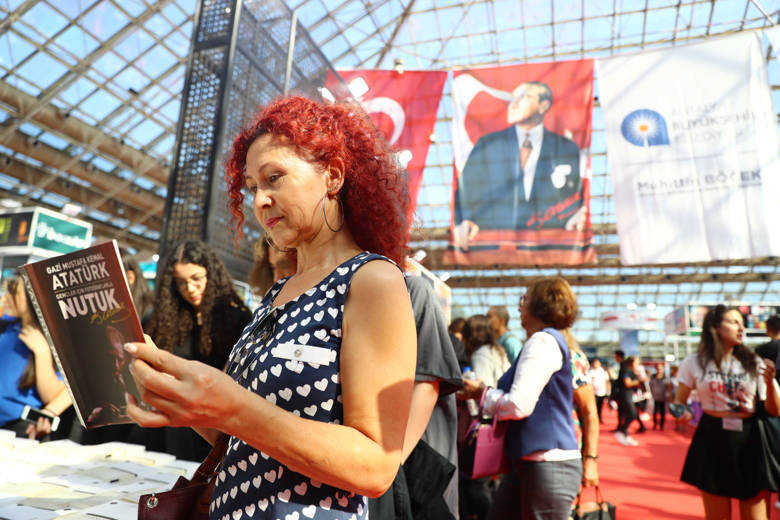 The 12th Antalya Book Fair opened its doors, providing a 10-day book feast in Antalya. Antalya Metropolitan Municipality Mayor Muhittin Böcek stated that the Antalya Book Fair will be launched with the theme "Keep on Reading" this year and that 215 writers and 220 publishing houses will interact with Antalya citizens between October 21 and 30. "We shall travel to the magical world of words and books. Reading will heal us, and we shall see the power of knowledge." Mayor Böcek remarked

Gülseren Budayıcıoğlu expressed her happiness and enthusiasm to be with the citizens of Antalya in her speech. Budayıcıoğlu stated that she planned to attend the Antalya Book Fair three years ago but was unable to do so, due to the pandemic, saying, "You called me the guest of honor." In fact, I feel honored to be here. Our country has evolved into a country that reads books, enjoys reading books, and fills these fairs to the brim. That is something I am also proud of. It's a privilege to be able to witness those. I'd want to thank our Metropolitan Mayor Muhittin Böcek, as well as everyone who contributed the organization and supported the arts, books, and readers.I hope these beauties continue."

Muhittin Böcek, Mayor of the Antalya Metropolitan Municipality, stated that he is delighted to make Antalya, the capital of tourism and agriculture, a city of culture and art at the same time. Mayor Böcek stated, "Despite all the negatives such as pandemic, inflation, economic crisis, infrastructure, superstructure, social aids, local development, environment, and so on, we never deprived our citizens of cultural activities, artistic activities, concerts, and festivals while we implemented our projects in different areas one by one. With our many events that make a difference at the local, national, and international levels, we have increased the enthusiasm for culture and art to unprecedented levels."

The Largest Fair in Türkiye

Mayor Muhittin Böcek stated that the municipality is proud and happy to be hosting Türkiye's largest book fair for the 12th time, and that "we believe in the power of culture and art."We will travel to the enchanted world of words and books. Reading will heal us, and we will see the power of knowledge. Mayor Böcek stated, “We began our first fair in a tent in the city square, with the slogan "We Need to Read." Our goal was to bring readers together with the authors and to show our appreciation for the authors' efforts. In the last 12 years, our fair has grown to become one of the most important cultural events in our country and city. Despite the pandemic, we had a successful book fair last year, with 589,786 book lovers attending. We all went through this difficult time together, heart to heart. We have done and will continue to do everything together. ”

The book "Second Life" was introduced to the readers.

Mayor Muhittin Böcek stated that the fair means even more to him this year,  stating that "I will be with you both as the Mayor of Antalya Metropolitan Municipality and as the author of my new book "Second Life, Politics, and Betrayal." He wished the fair to be beneficial and thanked everyone who had supported him, saying, "I will be with you during the fair with my first book called "I Am In Love With This City."

Özgür Özel: 'Reading Time in Türkiye is one minute.'

At the start of the Antalya Book Fair, CHP Deputy Chairman Özgür Özel expressed his pleasure at being there.Muhittin Böcek's decision to launch the book fair during his duty as Mayor of Konyaaltı Municipality and bring it to the Metropolitan, according to Özgür Özel, was also significant."We continue to walk on Atatürk's path that believes in science and knowledge," Özel said, recalling that the most important testament of Mustafa Kemal Atatürk to his citizens is to read. Pointing out that the time allotted for reading in Türkiye is one minute, Özgür Özel said, “This period is 60-70 minutes in Europe. 300 minutes in Japan. In Türkiye, one minute. The issue that we are the first in the world is our 6 hour TV viewing rate. The time spent on the Internet is 3 hours. According to UNESCO, we are in 86th place in reading books in the world. The book is ranked 235th on TUIK's list of needs, where bread is the most important need. As the time spent reading books in the world decreases, so does national income, democracy, and the rule of law. Human rights violations are on the rise, as are child abuse and violence. It's terribly sad. The number of people who read books will rise in the second century of the Republic. People like us, like you, will lead the country, and othe number of us will increase," he noticed.

The top names in Turkish and international literature will meet book lovers at the 12th Antalya Book Fair, which will host 215 authors and 220 publishing houses for 10 days under the theme 'Keep on Reading.' Many authors will attend book signings and discussion events.