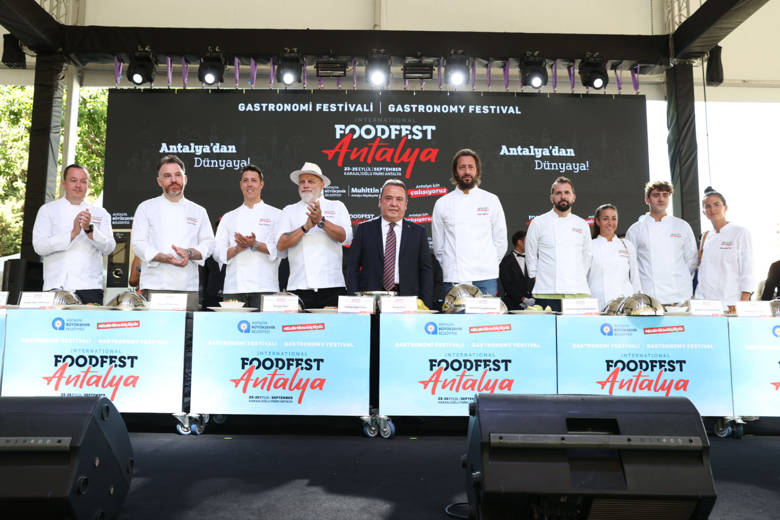 The center of global tourism and the source of flavor, Antalya, was surrounded by the joy of gastronomy.

The center of global tourism and the source of flavor, Antalya, was surrounded by the joy of gastronomy. The Antalya Metropolitan Municipality organized the 1st International Food Fest Antalya, which welcomed visitors from all over the world with the motto "Sustainability, Biodiversity & Supporting Local Products" in an attempt to preserve local cuisine. The worldwide festival, which was held in Antalya Karaalioglu Park, kicked off with the official opening ceremony under the theme "From Antalya to the World." Before the event, Mayor Böcek and guest mayors went to the Karaalioglu Park festival booths where the flavors of Antalya were first served.

We Will Introduce Our Culinary Culture

Speaking at the event's launch, Metropolitan Municipality Mayor Muhittin Böcek remarked, "Today is a very important day for Antalya. Food Fest Antalya is of great cultural and economic importance for both Turkey and Antalya. We are gradually succeeding in our mission to make Antalya the world's tourism and agricultural capital, as well as the capital of culture and the arts, especially to its sea, nature, blue, green, and distinctive beauty. By combining the Mediterranean flavors of our city with Anatolian cuisine, we are taking a significant step to elevate our culinary culture to the level it deserves in the global arena at the International Gastronomy Festival, which we organized for the first time this year.

Mayor Böcek emphasized that Antalya is a significant treasure because of its locally produced goods, diverse cuisine, up to fifteen geographically marked products, natural resources, and cultural riches, adding that these qualities are what make Antalya the most beautiful city in the world. With the international cuisine festival we brought to our city, we bring value to the nation's economy, tourism, and production.

The Name Of Our Kitchen Will Be Written In Golden Letters.

Mayor Muhittin Böcek underlined that Antalya, which has fertile lands, ranks first with its many products thanks to its production of vegetables and fruits and greenhouse cultivation activities, and said, "Our beautiful city, which has tastes that you cannot taste anywhere else, will now be in a place worthy of its name in the field of gastronomy. Because we think that Antalya deserves the best and most beautiful of everything. "We are bringing together our Michelin star chefs, gourmets, gastronomy and tourism writers, professionals from different fields of the sector, valuable operators in the food and beverage sector, in Antalya, we organize the International Gastronomy Festival with the theme of 'From Antalya to the world.' We will share special tables that have been thoughtfully prepared during our festival, which will last three days. Today is the day to safeguard locally sourced goods and establish a lasting legacy."Mayor Böcek said. Mayor Böcek thanked each of the Antalya institutions and groups that had helped make the festival possible individually after finishing his speech.

Following the festival's official start, a panel discussion titled "Publishing Studies to Highlight the Gastronomy Wealth of Cities" was held with the involvement of the Metropolitan Mayors of Antalya, Hatay, and Adana, which are known for their delicious cuisines.Antalya Metropolitan Municipality Mayor Böcek said during a panel discussion moderated by Sözen Group CEO Gökmen Sözen that the Metropolitan Municipality puts a significant importance on agriculture and will continue to integrate agriculture and gastronomy "In this regard, we support numerous cooperatives.We continue to work while keeping in mind regional development.With our livestock, beekeeping, and return to village projects, we support our farmers and producers. We empower irrigation cooperatives with their energy needs. Three days of panels and speeches on a wide range of topics will allow us to exchange ideas. We'll study the suggestions."said.

We want to introduce our wealth to the world

Hatay Metropolitan Mayor Assoc. Prof. Dr. Lütfü Savaş, who has held the title of UNESCO City of Gastronomy since 2017 spoke about the initiatives taken to make Hatay a global center for gastronomy. Mayor Savaş stated, "We tried to increase the brand value of Hatay. We are attempting to introduce these values and experiences from Hatay, where 13 distinct civilizations and 23 different cultures exist. We began operations in 2010, and as of October 2017, we were ranked as the world's 26th-largest gastronomy city.

Zeydan Karalar, the Mayor of the Adana Metropolitan Municipality, emphasized that every province has its own unique flavors and delicious cuisine and remarked, "It is up to the mayors to promote these richness to the world." We could improve our tourism activities even more if we embrace it. We're attempting to achieve that.

Combination of Taste, Conversation, and Entertainment

Aspects like Clean Agriculture, Qualified Agriculture, Sustainable Gastronomy, Effect of Chefs in the Promotion of Local Cuisine, Active Role of NGOs in Tourism Gastronomy, Spice Mining in the Food of the Future, Success of Antalya Hotels in Gastronomy, Importance of Biodiversity for Chefs, Antalya's Share in Gastronomy Tourism, and many other issues that will shed light on the sector will be thoroughly discussed during the festival with the participation of experts in their fields.

Tourists and residents of Antalya came to the festival area, which was set up in Karaalioğlu Park as a part of the International Food Fest Antalya. The places where the local foods and agricultural products from Antalya were exhibited became the center of interest. Visitors tasted Antalya's diverse cuisine while learning about the local products.