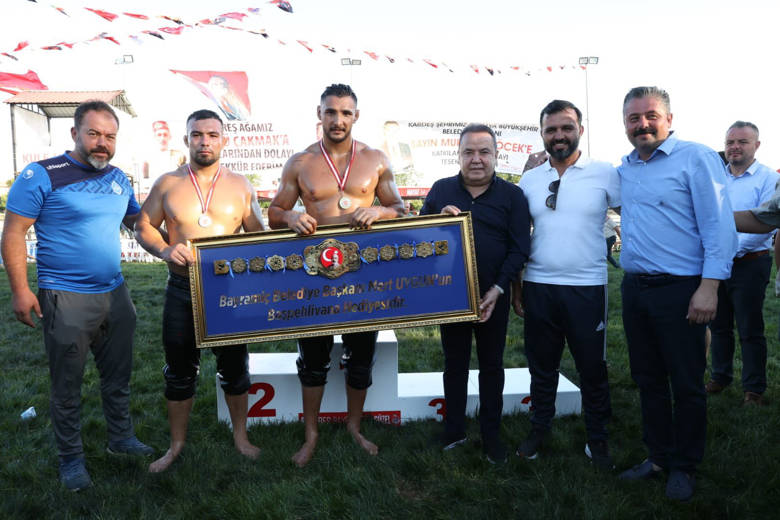 Metropolitan ASAT wrestler Mustafa Taş became the chief wrestler of Bayramiç Mehmet Akif Ersoy Oil Wrestling, which was held for the second time this year in Çanakkale. Bayramiç is the sister district of Antalya Metropolitan Municipality. Başpehlivan Taş was awarded the gold belt from the hands of Mayor Muhittin Böcek.

At the 2nd Bayramiç Mehmet Akif Ersoy Oil Wrestling held in Çanakkale Bayramiç, the sister district of Antalya Metropolitan Municipality, Mayor Muhittin Böcek did not leave his athletes alone. Citizens of Bayramiç showed intense affection to Mayor Muhittin Böcek in the wrestling arena. Mayor Böcek greeted the citizens who filled the Bayramiç wrestling arena and wished success to the wrestlers.
Our wrestlers are fighting with their heart and soul
Antalya Metropolitan Municipality Mayor Muhittin Böcek thanked Bayramiç Mayor Mert Uygun for hosting such a beautiful organization. Mayor Muhittin Böcek said, “There is a magnificent beauty here. Our wrestlers went out to the arena and gave their best. We saw an example of this in Kırkpınar, and we brought the golden belt to Antalya. I would like to thank everyone who contributed to this event.”

We Get Very Important Support from Antalya Metropolitan Municipality
Bayramiç Mayor Mert Uygun stated that they were very happy and excited for the oil wrestling championships they held for the second time. Saying, “I would like to thank on behalf of our citizens of Bayramiç to Mayor Böcek for being here in Bayramiç,” and adding “Antalya and Bayramiç are sister municipalities. We have very important support. Town twinning is being done all over Türkiye, but our Mayor Böcek takes care of us like a 'Father'. On behalf of the people of Bayramiç, we thank him for his contribution and support to the making of the wrestling championships.”