Anasayfa › Cıty Guıde › Where to Visit › Historical Mosques and Churches

Yivli Minaret (Alaaddin Mosque, City Center): It is in the city center of Antalya. It is the minaret of Alaaddin Mosque, which was converted into a mosque in 1230 by Seljuk Sultan, Alaaddin Keykubad.Catching one’s eyes at the first look, Yivli Minaret considered as a symbol of the city. As its structure is cut up into slices by bricks, and constructed with 8 pieces of semi - cylindrical shape, it is named as Yivli Minaret. Very thick body had gained an aesthetic structure due to these grooves. Turquoise and dark blue colored Allah and Mohammad words are written to every direction of the floor.
Kesik Minaret Mosque (Korkut Mosque - Cami - i Kebir, City Center): That piece of mosque art from Seljuk period, was previously constructed as Panagelia Church in the name of Virgin Mary by Byzantium during 5th A.D., The monument was repaired during the Ottoman period, a part of it used as Mevlevihane (whirling dervish hall) and then opened to service as a mosque by Şehzade Korkut during Bayezit II. It is also known as Korkut Mosque or Cami-i Kebir due to this reason. It is renamed as Kesik Minaret as the mosque was destructed after the fire in 1851. 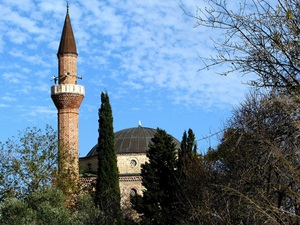 Karatay Madrasah: It was one of the significant Turkish – Islamic monuments and was built in 1250 by a Seljuk Vizier Karatay. Its door is marble and decorated with geometric designs and stalactites.
Kale Mosque (Sultan Süleyman Mosque, Alanya): It is at the west side of the shipyard of Alanya. It was constructed by Seljuk Sultan, Alaaddin Keykubad I. As it was re-constructed by Sultan Süleyman between 1530 and 1566, it is also known as Sultan Süleyman Mosque.
Saint Nicholas Church (Kale - Demre): Myra (Demre) is known as the place where Saint Nicholas, known as Santa Claus (Father Christmas) in Christianity world, had performed his duty as a bishop. Moreover the church was constructed during 6th century as a memorial to Saint Nicholas after his death. 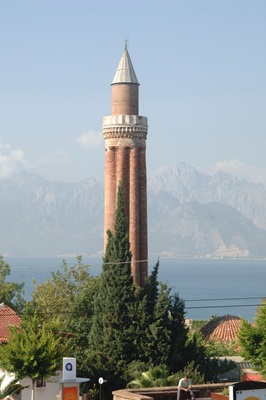 Some remnants of Saint Nicholas tomb which has been stolen to Bari city by Italian sailors during the second half of our century are currently exhibited in the Antalya Museum. International Santa Claus (Father Christmas) Festival organized every year in Kale (Demre) and Kaş between December 6-8 turn into a symposium where foreigners have also participated in Antalya recently. 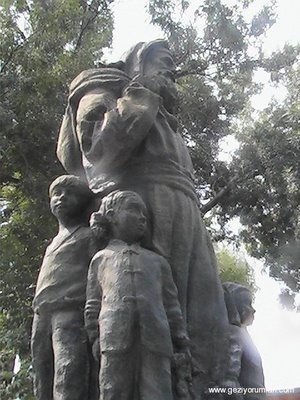 Aya Yorgi Church (Alanya): It is thought that the church within the Alanya Castle was constructed by Byzantium during 6th century A. D.
Evdir Han (Evdir Caravanserai): Until the beginning of the 20th century, transportation was provided by horses and camels and also goods were transferred by this way. The caravans accommodated in “Han” and caravanserai on the road. Evdir Han is one of them. It is on the road to north from Antalya. It is located 1 km east of Antalya - Korkuteli Road and 18 km away from city centre. The part that attracts most attention is its sharp pointed, arched portal. It is a Seljukian monument which was built in XIII century.
Kırkgöz Han: Kırkgöz Han is the second stop on the old Antalya – Afyon road. Kırkgöz Han is located in Kırkgöz, Pınarbaşı district that is 30 km away from Antalya. It is in very good condition. 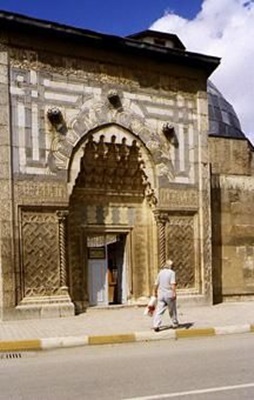